The Ties that Update 3! 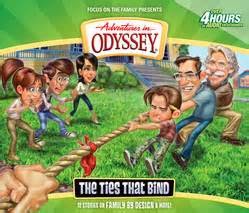 As you may know, The Whit's End Podcast has already reported that Album 58: The Ties That Bind will have 14 episodes instead of the usual 12. But there was still some uncertainty as to whether these extra two episodes would only be available digitally for download or if they would also be included on the physical CDs. But today the AIO Update has received word from Focus on the Family that the Album 58 CD set to be released this fall will indeed make room for all 14 of this season's episodes. They also said "the episodes will explore family themes and have a connected story arc." Stay tuned for upcoming Adventures in Odyssey news updates.
From AIO update
Posted by marknjoni at 6:04 AM